Step out a side door of Toppling Goliath and you’re on a patio, under an archway engulfed in hop vines. Walk to a vine to pluck the oily, bitter treat–that you then must pop into your mouth–and you’ll find yourself looking down on the edge of town that ushers you either into the boisterous downtown area, or to the serene Luther College campus.

You’ll also gaze upon Pulpit Rock Brewing Co., a brewery that just held its grand opening on August 21. It’s just down the road from Toppling Goliath, or TG as locals call it (even college freshman from Rochester, Minn., who’ve just encountered the brewery for the first time). It also sits below TG, on lower ground, a harsh, physical reminder of its place in the brewing pecking order of Decorah, Iowa.

It’s not that Pulpit makes bad beer: the problem is that TG makes much better beer when you compare the styles on tap. Toppling Goliath often has multiple IPAs ready to pour that are much better interpretations of the style compared to what the newcomer has available. If making beer is an art form, TG has long mastered the brush strokes needed to paint a perfect IPA.

It’s an unfortunate part of being a brewery in Decorah. One does not simply topple a goliath… and sometimes just stands in its shadow. It’d be the same for a brewery that opened in New Glarus, Wis. Not only is that brewery’s newest, and main, location atop a hill that imperiously stands guard over the Swissconsin town, but it too makes world-class beer.

But back to TG. All but one beer (Tsunami Pale Ale) would be deemed fantastic by myself and a friend who took the trip down to Iowa with me. Later we’d head downtown for a fantastic dinner and even find the 100-perfectly-rated-on-Beeradvocate King Sue on tap, as well as buy a bottle of Sosus–an orange juice-flavored Imperial IPA currently sitting at a 98 on the popular review site. Its 98 is well justified, though the flavor got a bit boring towards the end of our bottle.

We used dinner as a way to assess the number of fine beers we had imbibed so far. We took notes at the brewery during our flights, and ruminate on them some more while we took our dinner “break” before heading to Pulpit.

For sharing’s sake, our brief beer reviews (and really, you only need a few words for a beer; brevity is everything):

Murphy’s Irish Red (Irish Red Ale): a serviceable, great amber. Not the best I’ve had (that honor goes to Lil’ Red Riding Wood from Big Wood Brewery in White Bear Lake, Minn.), but it’s malty and sweet, with a little bit of bitterness that reels it back in.

Pompeii (American IPA): A rather complex treat of hops–and sessionable. A heavy pine aroma is misleading, as the flavor contains a subtle pine flavor. Citrus fruit, a crispness to it, and not overbearing. We bought a bomber of this to quaff when home. 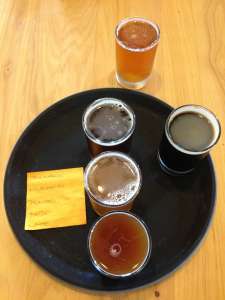 1492 IPA (American IPA): we had this in a bottle. It tastes like the aftermath of an explosion of grapefruit, pine, and orange flavors–all popping in and out of a tasty malty backbone.

Mornin’ Latte (stout): Reminiscent of Pearl Street’s (La Crosse, Wis., brewery) coffee stout in that it has a punchy coffee flavor that is absolutely delectable. However, it doesn’t linger that long, and has an almost peanut butter beginning, with a definite shot of vanilla as soon as it hits your lips.

PseudoSue (American Pale Ale): I had already had this in a bottle, but tap is even better. It may be because the beer is contract-brewed offsite, but the tap version has a much punchier hop and bitter flavor initially, before relenting to some juicy fruit flavors. Fantastic in a bottle; better on tap.

Dorothy’s New World Lager (California Common): another beer I’ve had in a bottle (just a couple weeks before this trip I had TG beer in bottles, prompting me to get my friend and I a B&B to visit the brewery). It is reminiscent of Door County Brewing Co’s Little Sister witbier, which probably doesn’t make sense. But I get bread and a bit of pepper.

Golden Nugget IPA (American IPA): this was another brew, along with PseudoSue and Dorothy’s, that I already had in a bottle. My friend found it to be a great IPA; I thought it was merely OK. All tropical fruit and evergreen, ladies and gents.

Now where were we? Oh yeah–after dinner we stopped by our B&B on our way back to Pulpit, ready for round three of drinks. 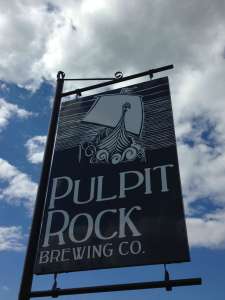 Pulpit Rock isn’t much bigger than TG. Its innards are a coterie of huddled together tables. And though the scene at TG is of young college kids and older men and women, Pulpit is much younger. It feels like it’s looking to attract the Luther crowd (which makes sense considering the trio of brewers are graduates of the college).

You can purchase Tallboys of Bud, Busch Light, and PBR, as well as Kalona Brewing Co.’s Oktoberfest, a fellow craft brewery’s beer. I’m not saying a brewery shouldn’t be able to sell PBR, but it’s quite odd to have it on a chalkboard alongside your five craft brews, further leading me to believe this is a brewery for the college crowd.

The different, bar-like vibe was palpable.

While TG would have its share of college students at the end of the night before they spilled into the neighboring bar for dancing and revelry, Pulpit was full of college kids early on in the night. But they weren’t your stereotypes: there was no shotgunning beers or causing a ruckus. It was just some good ol’ guys and gals looking for a cheaper beer to have, as well as some conversation.

It’s a decidedly different place. The two IPAs–Eazy Lover and 5th Ave. IPA–were serviceable; I’d drink them again. Preacher’s Porter was disspointing. The description promises smokiness; we found none. Maybe it’s because we love Alaskan Brewing Co.’s Smoked Porter so much (heavy flavores of smoked bacon, smoke, and more smoke abound), but we just didn’t get much smoke–or flavor, for that matter. Pulpit Rock Ale was completely forgettable, and left unfinished. 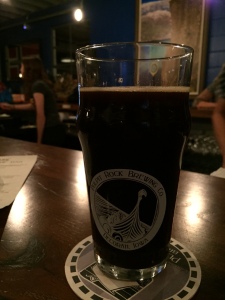 But Pour-Over Porter… that was good. The porter was full of strong, roasted coffee bean flavor. I’d not go back just for that, but it was a beer worth savoring for this duo.

Pulpit will not topple the Goliath. But it doesn’t need to.

I asked the two-person staff, a funny man (as in he provided funny quips) and a kind woman, about the brewery’s goals. No collaboration with TG, another place to drink, and their own philosophy… that was what I heard from them.

I also heard how the female bartender was hoping to brew beer. I gave her contact info for people she could talk to, and directed her to The Growler Magazine so she may read more about beer, the culture, and everything else. I hope that she does brew beer. She didn’t get much time to talk about craft beer, but you could see the fire in her eyes, the rise in her tone, and feel the excitement when brewing was brought up. Perhaps one day we’ll visit her brewery. I certainly hope so, especially considering she recently earned a degree in a scientific field that lends itself greatly to brewing knowledge. Skol and good luck, Whit! 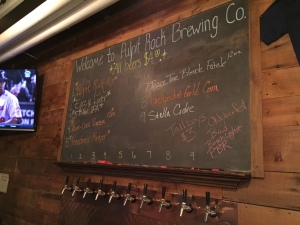 My partner in hops and I only visited the brewery because it had just opened, and when in Rome… why not? We agreed that we had fun. I wouldn’t stay for the beer, but I’d stay to chat with the bartenders and people sitting next to us. They were all very open about chatting about Decorah, college, and whatever else came to mind.

Pulpit also had a nice outdoor seating area, but it was too chilly for us to bother for more than a few moments. A nice addition, although there isn’t much to look at aside from the business the brewery shares building space with (a laundromat). Weird. But the owner of Pulpit owns the dirty laundry conqueror, too. So there you have it. 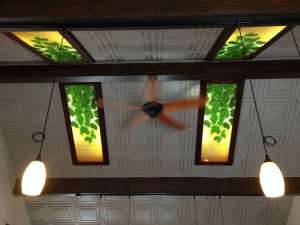 When writing a story you’re supposed to find a way to teach someone something new, to connect them with the world, or to possibly reaffirm or change beliefs based on the shared experiences with fellow humans.

I hope the takeaway from this is that TG is indeed a Midwest brewing powerhouse, and that you should visit it. I also want to say that Decorah is amazing, and its students were very welcoming during our visit at Pulpit and a local bar. An ex Luther baseball player took a selfie with me and the girl he was trying to woo; others came up to me when I stood at a pool table sipping on Newcastle brown ale to say hi and find out more about me. It’s not often that you receive that from college kids, and they were delightfully amused to hear I was much older than them, although I still look 14 if I get a good night’s sleep and shave my face.

I’d also hope that if you do visit Decorah that you make your way to Pulpit, B&B on Broadway, and the Rubaiyat Restaurant–the place we landed King Sue and Sosus. We also tried a delicious porter from Norway (the town wears its Norwegian heritage on its sleeve) called Nogne O that was absolutely, dumbfoundingly delicious, thanks to its dark fruit, fig, and chocolate flavors.

The restaurant would prove good enough for us to visit for potatoes and eggs in the morning, a much-needed boost before we left the small city behind.

We’ll certainly return to the Goliath on the hill. 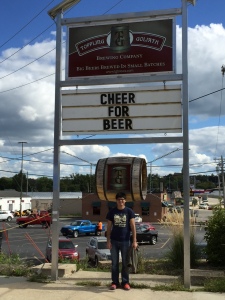