The road to opening a brewery is a bumpy one.

LTS (Life’s Too Short) Brewing Co. has had its fair share of hiccups, but is now set to open soon in Rochester, Minn. The brewery will be only the third to open in the city (though technically Grand Rounds is a brewpub), with Forager Brewing Co. set to open by the end of the summer, and Kinney Creek Brewery crafting beer since 2012.

So we chatted with head brewer Brandon Schulz about the roadblocks he’s come across, the impending brewery boom in a city most known for its medical care prowess, and what to expect from LTS. He’s already received feedback on the beer he’s produced with his 7-BBL system when he brought some to the Rochester Craft Beer Expo at the beginning of May, and hopes everyone will like the taproom’s bar-like setup. 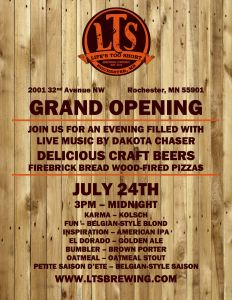 Louis Garcia: How has the process of opening the brewery gone? Any hiccups with the city of Rochester?

Brandon Schulz: The process of opening a brewery for us has had a lot of bumps in the road. Most of them have more to do with the city of Rochester’s somewhat unique plumbing and building codes and the inspectors who enforce them, as well as their unfamiliarity with breweries in general.

When we first started looking for commercial space for the brewery, we looked at a lot of different types of facilities–from suites in buildings downtown, to old gas stations, to places in business parks.

I was looking for a place that would have good logistics for shipping and receiving from the brewery side of the business, as well as a location we could build out a taproom for the general public. Nothing we looked at would have been as good for us as our location on 32nd Ave. NW [behind CareView Dental].

That being said, with the history of the building being a maintenance shop for excavating equipment [it took a while to convince the powers that be that LTS wouldn’t be doing any auto maintenance]. The garage doors are great for shipping and receiving, especially for the large brewery equipment we have had to move in and out of the building. The service pit provides a very convenient way to route steam piping and plumbing from our boiler and water treatment room to our brewhouse.

What were some unexpected issues that arose? Was anything easier than you thought it would be?

The process of becoming licensed at the federal, state, and local levels has been onerous, but mostly because of how heavily regulated this industry really is. Everyone I have worked with at the TTB, Minnesota Department of Agriculture, Minnesota Department of Public Safety, and the city clerk’s office here in Rochester has been very helpful, which is refreshing. I don’t think anything was easier than expected, but that’s probably as close as we can get.

What is your relationship like with other Rochester brewers? I’ve heard you’ve already helped out Steve Finnie over at Grand Rounds when he was in need of gypsum. [Find out more about how Kinney Creek Brewery helped pave the way for Rochester breweries over at Growler Magazine].

I think the relationship is pretty new, so it’s hard to say where it will go just yet. I’m hoping we continue to collaborate on the political side as I’ve already mentioned, as well as in the creative side by doing special collaborative brews, maybe work together on festivals, events, etc. We’ve already got a good cause community thing in the works for later this summer.

Brewers seem to naturally help each other out. It’s part of the community that draws me to it, actually. I’m hoping the same is true of all of the other brewers as well.

What do you think of Rochester’s little boom in breweries?

I’ve been working on starting a brewery in Rochester for over five years now, and to be honest, I was a little concerned about the boom at first. It took me so long to find the right business partner and to actually make my vision a reality that it seemed like I may have been too late. After meeting the people and hearing their visions, I’m really excited for the possibilities we have for collaboration.

What are your future goals with the brewery, and what kind of beer and atmosphere do you want to create?

My goals for the brewery really are to A, focus on local distribution–draft accounts at bars and restaurants–and B, open the taproom at the brewery. I want to create a community around the brewery. I want people to feel involved, both in the events and stuff we do through the taproom, as well as in the direction our products take, development of new recipes, etc.

I’m working on my Scottish ale… will be on tap sometime soon as well.